The problem with academics is that they often don't know how stupid they really are. They can dress up rampant foolishness in sophisticated verbiage and nuanced constructions such that it will gain the fealty of the great mass of intellectophiles (a term if not already existent I am coining to signify those who so desire to be included in the great ranks of intellectuals that they habitually dress naked emperors out of class loyalty) while the more humble “non”-intellectuals will see through the obvious idiocy even if they can't explain its deficiency in a form acceptable to the ivory tower Magisterium. What the common man sees clearly the “intellectual” is unable to see because he has obscured his vision with needless complexity, the very purpose of which, whether intended or not, seems to be only to present a foolish idea with the image of a credible argument by the sheer mass of its verbiage and mental gymnastics. It is rather like walking into a maze and thinking you have traversed a great distance in it when you have really only ended up a few feet away in another tortuous passage. There is no progression. A smarter man would have walked around the maze, recognizing it for what it was.

Case in point: Rowan Williams' blithering idiocy regarding the inevitability of sharia law. The idea that any portion of this monstrosity of Islam could be permitted on a voluntary basis only shows that Williams has not thought out clearly at all what sharia law is or what is the very nature of Law in a civil society. In ant civilization there can be only one supreme law. All other relationships must be, from a political point of view, inferior and subordinate, and the form of this subordination is directed not by the inferior but by the superior. One cannot have a system that makes the woman inferior to the man with severe restrictions of liberty tolerated under a modern Western legal system which grants equality to the women, unless such inequality is freely accepted by the woman and constantly remains freely accepted. But this would make of the “lesser” legal system nothing more than an individually chosen relationship. Sharia could not be binding in any way because it can be allowed no force to bind. Only the common law of the land can bind. Otherwise there is no common law and hence no common land, no common wealth.

But such an arrangement is exactly what sharia does not permit of itself. It is not a set of principles expressing a cultural variation of a common humanity. Sharia represents itself as the very expression of the law of Allah, a law which is meant to be implemented in human society. Sharia cannot be modified to fit the frameworks of a Western civilization. Sharia is the “natural” law of an entirely different civilization, one which repudiates the legitimacy of all other civilizations. One might as well try to integrate republicanism into a monarchical system. Or one might try too sustain a democratic republic birthed in the recognition of human equality while tolerating the enslavement of a class of men. It doesn't work and civil war is the inevitable result if the attempt is persisted.

Many of the initial defenses of William's statements concerning sharia have taken the standard intellectophile approach. Williams is simply “too smart” for many of us plebes to understand his complexity. “Thinking”, some say, “is hard work”, and we should be thankful we have a leader willing to undertake the enterprise.

Yes, well, this is the very problem. Thinking may be harder than not thinking, but thinking stupidly or half assed is easier than thinking things clearly and thinking them through. It is one thing to “raise the question”. That is the east part. Offering thoughts that productively guide us to a conclusion on the issue is the real hard work that many of our pointy headed intellects seem to eschew. William's may be credited for seeing the difficulties of the relationship of law and religious groups in secular and multicultural society. But beyond raising the issue what has he done to hint at a solution? If there is any direction that his raw and hastily and imperfectly informed comments it is only toward that conclusion which he is distancing himself from now because of the vast negative reaction it is receiving.

If we are to give him the benefit of the doubt that he didn't mean what a simple and unnuanced reading of his comments indicate, that he was merely seeking to “open up some of these wider matters” and “tease out some of the broader issues” then he is to be blamed for speaking as if he was saying something definitive when in fact he wasn't. Secondly he is to be blamed for not speaking definitively, for not giving some definitive answer. What is his position as chief cleric in the land if it is not to give concrete guidance? What is the good of opening the issue of the futility of modern life, say for a teenager, if you don't go on to direct him toward something meaningful that will keep him from blowing his brains out? Thirdly Williams is to be blamed for speaking before he has thoroughly informed himself on the matter.

The simple and easily demonstrated matter is that Williams doesn't know what the hell he is talking about when it comes to Islam and sharia. He seems to assume that Islam allows for a “dual identity” of citizen and believer. Nothing could be further from the truth. Islam is a coherent traditional religion in which the politics of the state and its religion are inseparable. Islam is meant to be a spiritual as well as worldly religion. In fact, it is far more intent on being worldly than it is otherworldly. Islam must rule the world, according to its prophet and all his disciples who follow him. This is quite distinct from the Christian witness that the kingdom of this world is fleeting and will pass away. It is the kingdom of heaven, which exists now in heaven in perfection, which will come to reign upon the earth after earthly kingdoms pass away. This picture of the two kingdoms, or two cities, allows for the kind of duality that Williams seems to think possible under Islam but in reality Islam recognizes no two kingdoms. The two realms that do exist in Islamic thought are the two houses, the House of Islam, the dar al-Islam, and the House of War, the dar al-Harb. The latter is wherever Islam is not the ordering principle of society. Williams has been listening too much to liberal Muslims or Muslim apologists smarter than he who know how to tell him what he wants to hear. Muslims only possess this duality, this enlightened idea of religious toleration when they aren't ruling. Williams only demonstrates that he doesn't get around much in the Muslim world or simply doesn't open his eyes. He might as well be defending the Third Reich by saying that Auschwitz was an abuse of Nazism's purer principles.

What is equally bad about Rowan's musing is that in simply seeking to raise a serious issue he unreflectively assumes things he should rather question. He takes it as a given that Britain will not or cannot maintain Christendom and that a multicultural society is inevitable. Let us leave the question of why he does not think a Christian culture can or ought to be defended. What seems remarkable is that it does not occur to him to question the very establishment of a church in a nation no longer dedicated to the faith that church is supposed to proclaim. If Britain is no longer to be a Christian nation, whose laws should all be based upon Christian morality, should the ABC not call for the State to be utterly neutral toward religion and treat it as an irrelevancy in regard to the law? Would this not free him to be freer in preaching Christ and Christian morality and less shackled to defend the politics of multiculturalism and trying to figure how to make discontented Muslims happy? Rather, he should be trying to make Muslims become Christian.

When he defends giving sharia space in order to give freedom to Christians in the realm of abortion and adoption, allowing Christian hospitals not to be forced to perform abortions and Christian adoption agencies not to have to place children with gay couples, why does he not instead question the authority of the State in making rules in this regard. Instead of champoning for more freedom for all he fights for freedom of one group to oppress another. Braindead and shameless. That Anglicanism's chief cleric can't see what an atheist like Christopher Hitchens sees is bad enough. That so many of Anglicanism's illuminatti line up to defend his droolings as being marks of a superior intellect is worse.
Posted by Christopher Hathaway at 12:41 PM 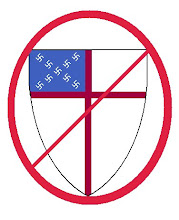